Nauticam’s original Wide Angle Conversion Port—better known as the WACP-1—enjoys something akin to cult status in the world of underwater imaging. Our reviewer’s assessment of the attachment is typical: “[T]he picture quality that can be achieved with the WACP far surpasses any system with a dome port—and with much more flexibility.” But at more than $5,000, it’s fair to say that the WACP-1 is out of reach for the average cash-strapped shooter. Enter the new WACP-C. That’s “C” for “compact”—not “cash-strapped”—but the price tag of a little over $3,000 is definitely going to sound more attractive to the majority.

The WACP-C has much in common with its pricier big brother: Like the WACP-1, it’s a “dry” optic designed for use with a full-frame lens of 28mm (equivalent) focal length, and it’s compatible with Nauticam housings with an N100 port mount. (Unlike with the WACP-1, there’s no N120-to-N100 port adaptor in the box to facilitate attachment to N120 housings.) The main physical difference is size and weight: The WACP-C is approximately 37% smaller (by volume) than the WACP-1. And while the WACP-1 is 3.9kg (8.6lbs) out of water, the WACP-C weighs in at 2.24kg (4.9lbs).

Functionally, the WACP-C and WACP-1 offer the same angle of view up to 130°, full zoom-through capability, and minimum focus from the front element. However, the two ports do differ in terms of optical performance, which presumably accounts for the price difference: According to Nauticam, the WACP-C provides “approximately 3 f-stops of increased corner sharpness when compared to traditional wide rectilinear lenses with a similar field of view behind a dome port,” while the WACP-1 offers “approximately 4 f-stops.”

Priced at $3,283, the Nauticam WACP-C can be ordered now from retailers such as Backscatter.

The WACP-1 and WACP-2 have raised the bar on what is possible in underwater optics. They offer the maximum in image quality with the widest angle of view available in a rectilinear lens. Nauticam is now excited to release the next iteration of WACP, the WACP-C. The Wide Angle Conversion Port Compact (WACP-C) is a fraction of the weight and size when compared to the WACP-1 and WACP-2. When looking at volume, the WACP-C is approximately 37% smaller than WACP-1 and 75% smaller than WACP-2. 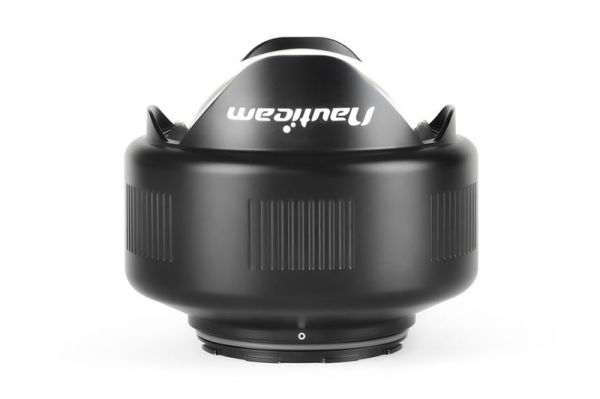 Like the WACP-1 and WACP-2, the WACP-C is a dry mount lens design, functioning as both a port and optical lens. It is optimized to work with professional camera lenses up to a full-frame equivalent focal length of 28mm and offers an amazing 130° angle of view. The WACP-C can focus as close as the front element and captures images with minimal distortion.

A wide variety of lenses are supported, both primes and zooms for a variety of cameras. Please check the WACP-C PORT CHART for supported lenses and suggested configurations as some lenses will require extension rings or adapters. 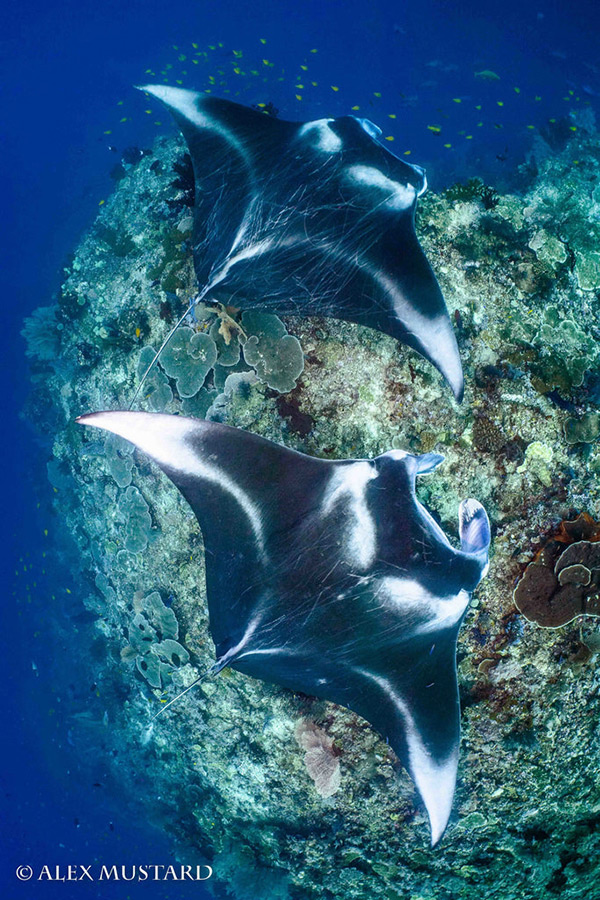 Similar to WACP-1, the WACP-C greatly improves the overall image sharpness. The WACP-C will provide approximately 3 f-stops of increased corner sharpness when compared to traditional wide rectilinear lenses with a similar field of view behind a dome port. This means being able to achieve about the same corner sharpness with WACP-C at f/5.6 that you could achieve with your rectilinear lens behind a dome port a f/16. As a point of comparison, WACP-1 provides approximately 4 f-stops of increased corner sharpness. 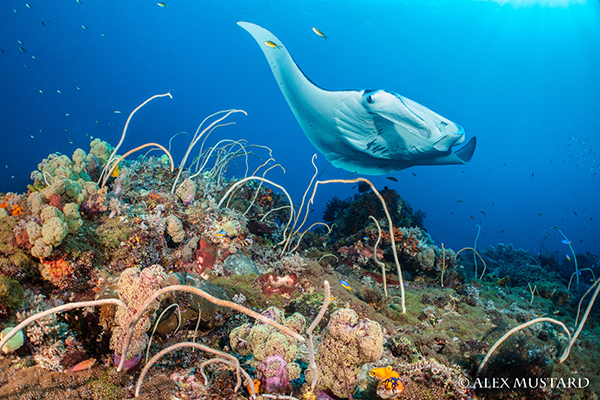 The WACP-C’s zoom-through capability means the underwater filmmaker or photographer can capture astonishing wide, medium and close-up shots all with one lens while maintaining optimum optical and close-focus performance. Take for instance the Sony 28-60mm f/4-5.6 lens which receives a field-of-view range of 69º to 130º with the WACP-C. This lens allows for acquisition of more dynamic content on each and every dive without the need for a second camera. 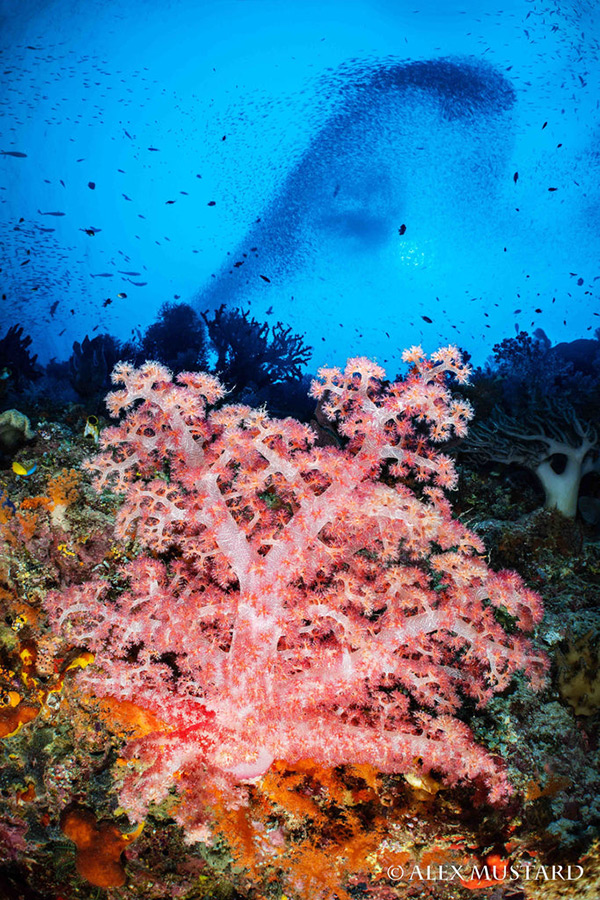 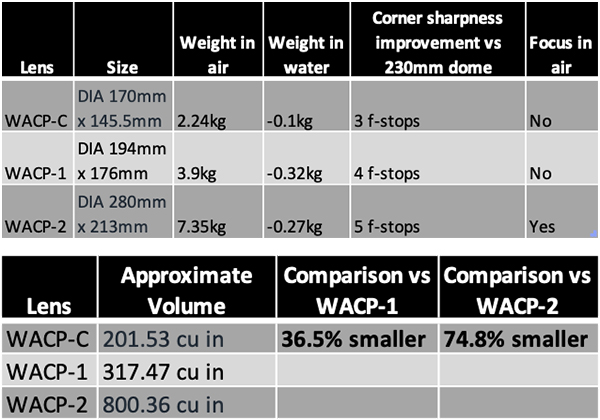 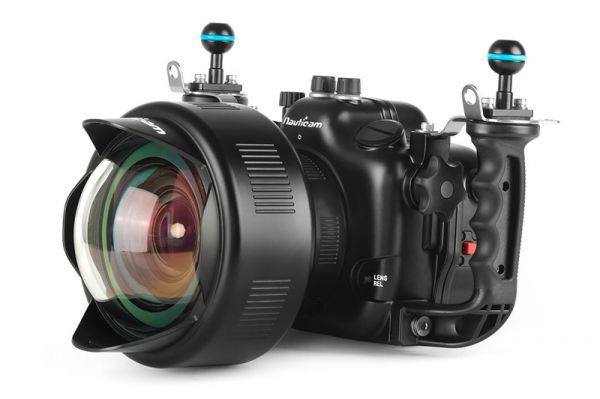 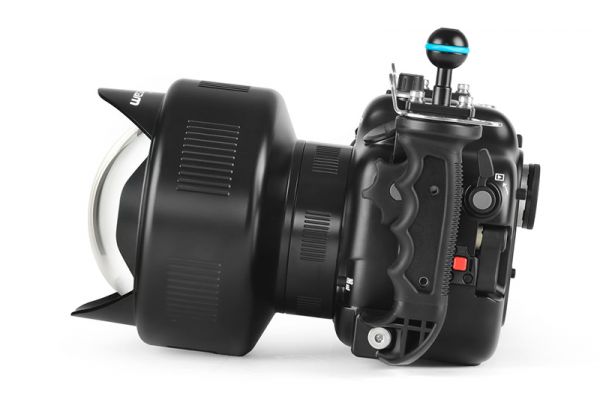