There are two new Canon APS-C mirrorless cameras available. There is the EOS R10, a relatively simple camera, and there is the EOS R7, a camera that promises a lot of things and also delivers a lot. Canon Netherlands gave me this camera for a week when I went on a holiday. These are my findings.

The Canon EOS R10 and Canon EOS R7 are two new APS-C mirrorless cameras, but not Canon’s first ones. Prior to these cameras, the manufacturer produced the EOS M line mirrorless cameras. Those are great cameras, although not the best in its class on the market. For one, they lack an IBIS system and don’t offer top of the line autofocus options.

With the EOS R10 and EOS R7, Canon brings APS-C not only to the RF system, it promises the wonderful autofocus system they offer in their EOS R6, EOS R5, and EOS R3 cameras, and for the EOS R7, an IBIS system.

Although the EOS M Series, like the affordable EOS M50 Mark II, are very capable cameras, the EOS R7 surpasses it in every way possible. Of course, the price is twice as high, but you get so much more in return.

When I was asked by Canon Netherlands to review the Canon EOS R7, I decided to take it on a holiday to Germany and Luxembourg. Nothing special, just a week relaxing and visiting the beautiful landscape, villages, castles, and ruins. The goal for this review was to see how the Canon EOS R7 performs as an everyday camera.

The Canon EOS R7 in Detail

The specifications are probably well known by now. There is the new 32.5 MP sensor that is not stacked or back-lit. It’s APS-C, of course, with a 1.6x crop, and the camera incorporates an IBIS system of up to 7 stops. It allows you to shoot up to 15 fps continuously with a mechanical shutter and 30 fps with the electronic shutter. If you like, half-second pre-shooting is available, recording up to 15 frames before you fully press the shutter release button.

There is the Dual pixel CMOS AF II system, with 651 AF areas that can track human eyes, head and body, a wide variety of animal eyes, heads, and bodies. And not to forget vehicles like cars and motorcycles. The autofocus works up to -5 EV.

Despite its size and weight, the camera is well equipped with functions and buttons. It also has something new: the pairing of the joystick and a scroll wheel. This combined button and wheel is located on the back, the place where you place your thumb when holding the camera. Next to it, you find the AF-ON button.

An improvement is the main switch, because it can be used to switch between stills and filming also. It is located on the right side of the camera, next to the PASM dial. If that is a good choice is subject to discussion, because the dial that can be found at that location on the full frame mirrorless cameras is lost.

A real improvement is the AF/MF switch in front of the camera. I do like this one, as it makes it incredibly easy to switch between AF and MF.

The LCD screen is fully articulating and has 1.632 million dots. The electronic viewfinder has 2.36 million dots, making it not the best one available, but it’s not bad either. It has a maximum refresh rate of 120 fps and an optical simulation, which makes the viewfinder respond like an optical viewfinder.

The Menu and the Available Functions

The camera incorporates the well-known and well-designed menu system that Canon is known for. It can be operated by the touchscreen or with the buttons. It also allows you to customize a lot of buttons. The AF system has many customization possibilities, similar to the Canon R3 flagship camera.

Perhaps the most surprising are the creative options Canon offers inside the menu. These are the same creative options you find on lower-end consumer cameras and the aforementioned Canon EOS M50 Mark II. There is a miniature effect, fisheye effect, toy camera, and much more. I find this a bit strange because you wouldn’t expect this on a camera like this.

You can switch off these functions and you’re not obliged to use them, but they’re clearly addressing a JPEG photographer who I would not expect to use the full capabilities of this camera.

Shooting With the Canon EOS R7

I have been using the camera mainly for candid shots during our holiday. I limited myself to the RF-S 18-150mm lens and wanted to find out how I would like the camera for this kind of use. I put the camera on my belt with a carrying system designed for light and small cameras. It worked quite well, and I really enjoyed shooting with the Canon EOS R7.

Images made with the Canon EOS R7 with different settings

One minor issue I ran into was the newly designed wheel and joystick. My muscle memory did expect the controls in a completely different place, and I lost some time on different occasions before I found the controls. It’s a matter of time to get familiar with this design, of course. But I can imagine how someone that uses the EOS R7 next to a EOS R6, EOS R5, or EOS R3 might have some difficulty switching back and forth.

If you’re into action, the pre-shooting option is a nice feature that already can be found on cameras of other brands. Pre-shooting starts recording frames the moment you half-press the shutter release button. At the moment you fully press the shutter release button, the frames that have been recorded in the previous half second will be stored also. This way, you have a maximum of 15 photos recorded before you actually take the photo.

Another nice feature is the automatic horizon level correction. Although I was skeptical at first, this option works very well. When a horizon is titled, you see the camera correct the crooked image in the viewfinder. This can be corrected in post also, of course, but if it’s corrected while shooting, it saves a bit of post-processing time.

Concerning the dynamic range and ISO performance of the new 32.5-megapixel sensor, as you might expect, it’s not up to par with the full frame sensors. After all, it’s smaller, and the signal-to-noise ratio is influenced by that. Although you can boost up the ISO up to 51,200, I found the results acceptable up to ISO 3,200, as long as the exposure is correct.

Although I didn’t perform any real ISO or dynamic range tests, I tried to lift some shadows in a scene with a high dynamic range, as shown below in the before-after example. This image was shot at ISO 1,600 and exposed for the highlights. Lifting up the shadows in post-processing shows an increase in noise, which is to be expected. I took it to extremes to find the limit. Correcting exposure by 0.5 stops, setting highlights to -100, and lifting shadows to +100 resulted in a noise level that works well for social media and sorts but is perhaps too much for large size printing. 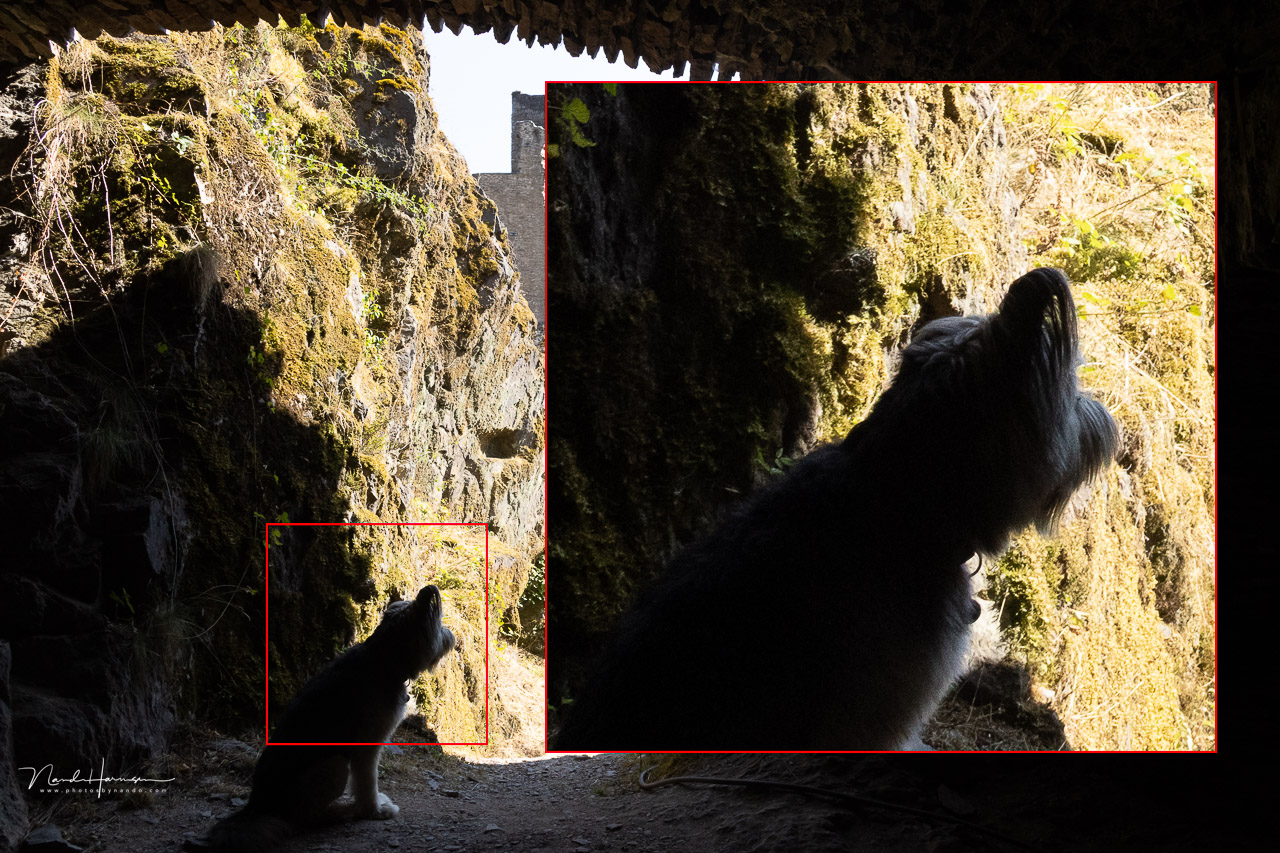 Filming With the Canon EOS R7

Although I used the Canon EOS R7 mainly as a stills camera, I shot some simple video footage in 1080p, 25 fps and CLOG3.

I didn’t test these things, because I haven’t used the Canon EOS R7 for video, except for some occasional recordings. But for this kind of camera, it can be considered as a great set of features.

What I Think of the Canon EOS R7

I took this camera with me on holiday to find out how it performs for this kind of photography. I used it for shooting inside villages, castles, and ruins. I took it with me on hikes through the countryside, and I took images of one of the passing birds of prey. Carrying the camera on my belt worked well. It’s not too large or heavy for this.

As said, I only used the kit lens, the RF-S 18-150mm f/3,5-6,3 IS STM, which I found to be a great lens for casual shooting. I’m sure the image quality will improve when more expensive, much larger, and heavier L glass is used. But I didn’t want to carry that much equipment during my holiday. After all, it was not a real photography trip.

Its features are sometimes comparable with a camera like the Canon EOS R3, and it is faster compared to many of the full frame siblings. It’s quick, has an amazing AF system, has great video specs, and a nice newly designed wheel and joystick system. But if you think you have a semi-professional APS-C mirrorless camera here, don’t be surprised if you’re confronted with helpful screens that address a beginning photographer or creative filters that are meant for the JPEG photographer.

There is one problem I ran into when using the Canon EOS R7. On many occasions, the camera froze up completely. Even the main power switch didn’t work anymore. The only way to get the camera working again was to remove the battery for a few seconds.

I recently discovered this to be a well-known issue. If the play button is pressed directly after taking the photo, this can happen. A firmware update will solve this, I expect. 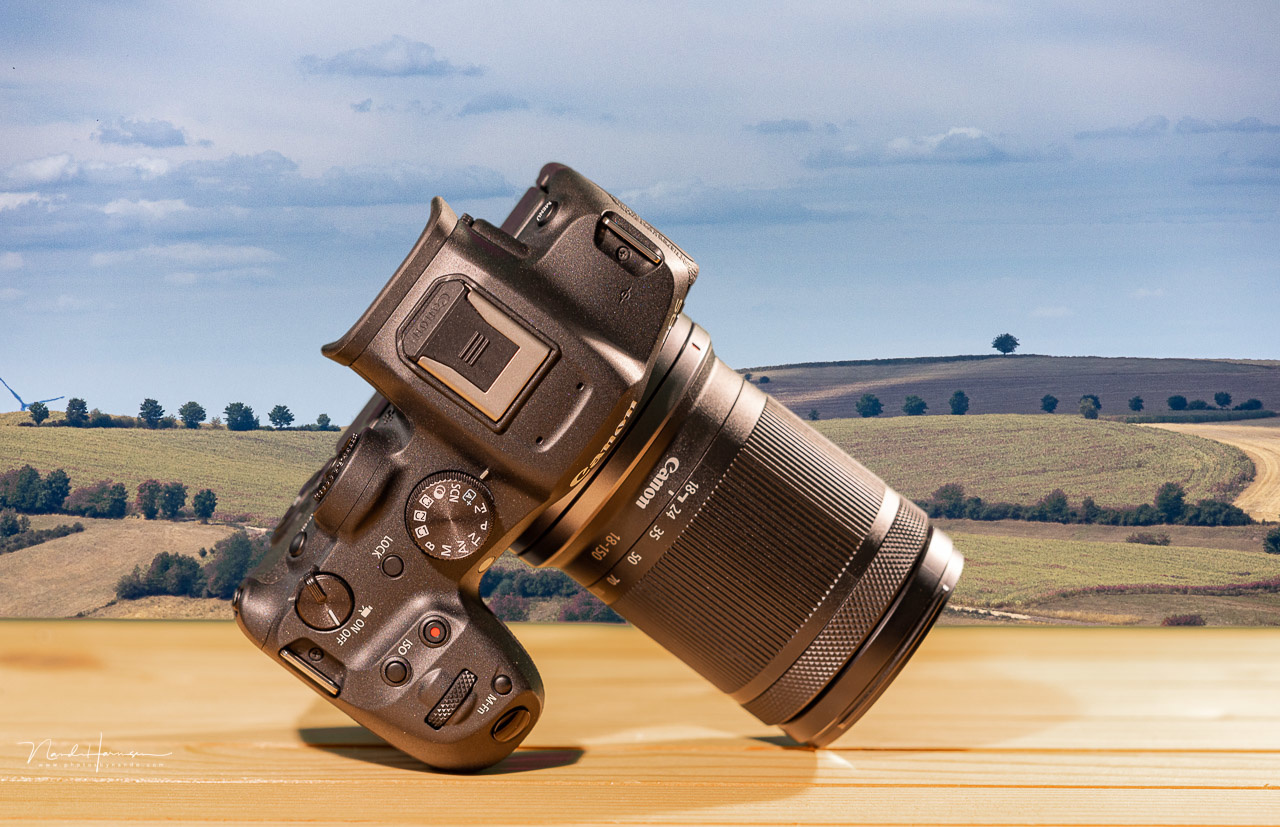 I do like the Canon EOS R7. It’s a great camera for a good price. If you’re in the search for a replacement for your Canon EOS 7D Mark II, I think you will like the EOS R7.

Also, if you’re looking to upgrade from the Canon EOS M Series cameras, this one will do nicely. You get access to all the great new RF lenses, and that’s a big plus. But the much better AF system is perhaps the greatest benefit over the EOS M Series.

I would like to thank Canon Netherlands for providing the camera for this review.

What do you think about the Canon EOS R7? Please let me know in the comments below.